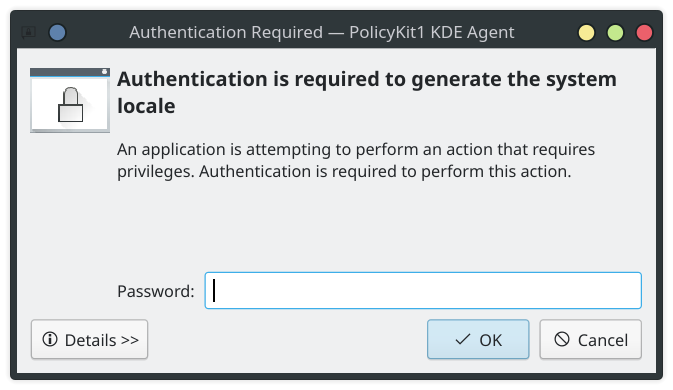 You can consider it as sudo of the GUI. But it works completely different than sudo. I spent two days trying to figure out what PolKit is, how it works, and how to use it to write a GUI tool that requires root privileges but can’t be run as root itself.

Unlike the permission system you see on Android or iOS devices, PolKit itself doesn’t do the actual work. The main component of PolKit is the PolKit daemon, which runs as root and registers itself on DBus system bus. The daemon monitors actions and rules configuration files, which in turn define the rules and individual actions can be executed on the system. The PolKit action itself is a descriptive name, and the rules are used to determine whether the given action can be execueted given the request process/user permission level. The PolKit agent is another process that runs in the user’s login session and communicates with the PolKit daemon. Whenever an action requires user/root password for authorization, the PolKit daemon notifies the agent for password prompt. The PolKit agent isn’t shipped with PolKit daemon because different desktop environment may want to have their own password prompt styles.

[PolKit is purely for authorization]

Recently I developed Formats & Language KCM. One of the task of the KCM is to activate and generate system locales. On some distributions, you must first enable locales in /etc/locale.gen and then call locale-gen to make the locale available. Both operations require root priveleges. But we can’t start plasma-setting as root, it’s not safe. So we have to rely on PolKit instead. I decided to have my helper listen on system bus, so we don’t end up with two helpers on two sessions. The whole authorization process goes like this:

Bear with my drawing :)

As we can see, it’s the helper that does the real work. Polkit is only used for authorization. However, to make sure that no other program can exploit our helper, we need to verify that the program sending message to the helper really has authorization. This is done through the subject parameter of the request we send to PolKit. Polkit support two types of subjects. One is POSIX PID, the other is DBus system service path. Each message has its own path, and DBus protocol ensures that one program can’t forge the service path of another program. So what we do in helper is pass the service path from the KCM request to PolKit. Of course, another program can still ask helper to generate locale, but PolKit will ask user for password, and the password prompt will show KCM’s description. We also make sure to filter out invalid input in helper to avoid generating invalid locales even if the user enters the password for the malicious program.

Actually you can just use KAuth, it abstractsa lot of details for you. But for learning and to avoid another dependency to plasma-workspace(although I still introduced PolKit-qt1), I went the hard way.

I spent two days building KDE from source, so you can do it faster What I'm doing recently